Remember my selection for next time

* When viewing product specific information please ensure that your are viewing your relevant country region as product classifications for a particular product may vary from region to region.

To measure the fluoride release and the change in weight, in deionised distilled water, of two restorative materials: Riva Silver and Riva LC and two fissure sealants: Riva Protect, Fuji Triage. The plan is to carry out this study over the scope of three years. 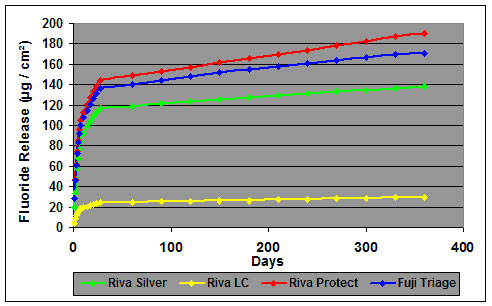 Riva Protect has the highest fluoride release among the four products studied.

Throughout the four months of this study (except for the first day) and in a decreasing order, Riva Protect fast cement released significantly greater amounts of fluoride than Riva Self Cure fast set, Fuji IX GP Extra and Ketac Nano respectively.
Abstract #166