Remember my selection for next time

* When viewing product specific information please ensure that your are viewing your relevant country region as product classifications for a particular product may vary from region to region.

seT – a self etching, self adhesive resin luting cement 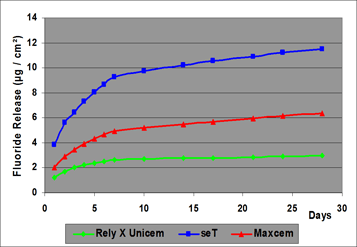 seT is a self-etching, self-adhesive, fluoride relasing, dual-cured resin cement that was evaluated by The Dental Advisor’s consultants and received a 96% clinical rating!

Many consultants rated the flow of the cement to be very good, had a nice viscosity and great adaptation to walls and posts. They found the mixed cement easy to use and cleans up nicely – a five plus rating!

Objective: To examine the retention strengths of two different cement types—Bonded Resin Cements and Self-Adhesive Resin Cements— between zirconia crowns and dentin in vitro. The following groups were tested:

Methods: Fifty-one extracted human molars were prepped for all-ceramic crowns. The crowns were cemented according to manufacturers’ directions for each of the three cement groups (N=17). Cemented teeth were stored in distilled water for 3 days at 37°C and then thermocycled for 300 cycles between 5°C and 55°C with a dwell of 30 seconds. Instron machine with crosshead speed of 5mm/min was used to pull the crowns until failure.

Results: The strength data was compared using one-way analysis of variance (ANOVA). The p-value of 0.086 suggests that there is no statistically significant difference among the 3 groups. The average bond strengths were Group 3=316.8N, Group 1=284.4N, and Group 2 =208.7N.

Methods: Seven commercial products were tested (Table 1). The setting reaction was studied by ATR-FTIR spectroscopy. An ATR accessory was placed in the sample compartment of an FTIR spetrometer. Spectra of non-exposed (NE) and exposed (E) specimens (standard mode, 750mW/cm2), dark storage at 37 degrees in all cases) were taken before setting, at setting time (NE) or after 20s light-exposure (E) and the at 10 min, 30 min, 1h and 72h for both setting modes. The extent of C=C conversion was assessed by measuring the amount of remaining C=C bonds (%RDB) employing the two-band technique. For the acid-base reaction the salt yield was evalauted after spectra normalization (C=O peak, 1720/cm). ANOVA was used to assess the statistically significantly differences (alpha = 0.05).

seT is a user-friendly, reliable self-adhesive resin cement resulting in minimal marginal staining, post operative sensitivity and a high retention rate, when used in the cementation of all-ceramic restorations.